It is the ninth day today. Gillian Marsh has been living on the edge: getting no sleep, jumping at every telephone ring and following the Six O’clock News for any sign of cataclysms, abductions and acts of international terrorism. Eight days ago her daughter went globe-trotting: Thailand, Australia, South Africa – in that order. Forty days of living on adrenalin and crackers, then back home – hopefully life lessons learned vicariously through other people’s misfortunes. Forty days – like The Flood…

Tara is not alone, she has a friend with her, but that is of little consolation. Both girls are only eighteen and have not seen much of the world outside the sleepy safety of Sexton’s Canning. Although Tara was born in South Africa she does not remember any of its perils; Gillian took her out of there when she was four, when Gillian’s marriage to Tara’s father Deon fell apart amidst tears, the spittle of angry words, and clenched fists. South Africa was not a place for a single mother with a little girl in tow. Gillian returned home with her tail between her legs. Her parents were delighted. Deon, on the other hand, declared the move a personal insult and withdrew into silence. Then, out of nowhere, three years ago, he got in touch, his second marriage in tatters, another ex-wife on the run and a teenage son in a boarding school somewhere in Somerset.

Deon wants to get to know his daughter. It is his right – who is Gillian to argue? For years, she has been feeling guilty for depriving Tara of a father. Those days are gone.

It was great when Deon came to visit and met Tara. They hit it off straight away, father and daughter, like two peas in a pod. But Gillian knew the day would come when Tara would want to go and see her father on his turf. She hoped it wouldn’t be too soon. Her prayers had not been answered. Tara decided to run to her dad as soon as she turned eighteen. There was no stopping her. She is a foolhardy girl, and her friend Sasha is bad news. It is their gap year. They are adults. They do as they please. Gillian is in for forty long days of sheer dread.

She will keep herself busy. The other option is to go mad with worry. For the past eight days she has been mulling over the mortal dangers her daughter is facing: human traffickers, tsunamis, food poisoning, AIDS-infected syringes buried in sand, sharks and enraged elephants. Gillian will put it out of mind. Next week she is going to London: three-weeks of training. She has been putting it off, citing the demands of single parenthood, but with Tara gone she has run out of excuses. Her promotion to the rank of detective inspector has been hanging over her head like the sword of Damocles. She will have to let it fall.

Her desk is the windmill of her mind with the sawdust of closed but undocumented casework threatening to suffocate her. She will have to deal with it in the next two days. Anything would be better than her single-finger typing. She often thinks of the keyboard as her personal punch bag. It is a battered old thing, but indestructible if you consider the amount of coffee spilled over it and the flurry of invectives thrown at it, all in vain.

Any distraction from her worst fears and even worse desk jobs is a good distraction, so when PC Miller ushers in an elderly couple, who in loud tandem demand to speak to someone in authority, Gillian is at hand to lend a sympathetic ear.

“She told us she’d be back yesterday, lunch time.”

“Did she say lunchtime, dear?”

“She did. She said by lunchtime, actually. The plane, she said, was landing at 8:40 at Heathrow, terminal 4. I have taken it all down. Flight number, the date, the time… I’ve got it here.” Mrs Devonshire’s bird-claw hand submits a notepad bearing the flight details recorded in an immaculate cursive handwriting. “If you could take a copy. I’d like my notebook back, please.

“The problem, you see, is that Miss Eagles knows we’re going away tomorrow. We told her straightaway when she came to ask if we’d look after Fritz. We said, it’s fine, we don’t mind taking care of Fritz, but we’ll be off on Friday morning. How fortunate, she said, that I’ll be back before you leave, otherwise I’d have to take Fritz to a cattery. He wouldn’t like that, I said. Eunice would never part with him. Eunice, you understand, was Miss Eagle’s aunt. Sadly, she passed away last year. We’ve always been good friends with Eunice. We’ve been neighbours for forty years. Miss Eagles moved into Eunice’s cottage, what… would you say five months ago, dear? Maybe four… I lose count.”

“She told us to call her Nicola,” Mr Devonshire gazes pleadingly at his wife. He has a narrow face with pale, arched brows that give him a look of permanent bewilderment.

“We couldn’t, dear, not right away… We’ve only known her for five minutes. Well, I couldn’t anyway. You can call her what you like, though I simply wouldn’t go as far as the first-name basis… I’m particular that way. Anyway, we don’t want to bore the police with details.” At this point Mrs Devonshire’s attention returns to Gillian. “As I was saying, Miss Eagles was very excited about her holiday. She’s never been to the Maldives, she said. Neither have we, I told her, small world! We had a giggle, didn’t we dear?”

Mr Devonshire nods agreement and pats his wife’s hand with affection. Gillian is copying the details from the notebook: a flight from Colombo, UL4016, lands 8:40am, Wednesday 6th February, mob: 078 45291022… “Have you tried calling her on her mobile? She left you her number.”

“Well, no!” Mrs Devonshire looks horrified. “The cost is prohibitive even if she weren’t abroad, which she may well be, considering that she isn’t here, don’t you think? We thought the police should be making the telephone calls, especially the ones abroad… We are pensioners, and like I said, we’ve only known her for five minutes…”

“No. But we are leaving tomorrow. We’ve had a holiday home booked for months. The same holiday home we book every year. We go every year, you understand, without fail. We couldn’t cancel if we wanted. It just wouldn’t do! On the other hand, we simply can’t walk away from it, can we dear? We owe it to dear old Eunice, don’t we, to look after that girl.”

Gillian feels a cold sweat run down her spine. She is thinking of Tara. What a bad idea it was to let her go. God, what a damn stupid idea!

“How old is Miss Eagles?”

“Oh, we don’t know, do we dear? We wouldn’t dream of asking. She isn’t a spring chicken. I don’t want to sound rude, you understand, but she is… what I call beyond the childbearing age.”

“Dear, you’re talking of her as if she were dead! She may still be alive, just… delayed, or detained somewhere. I dare not speculate…” Mrs Devonshire covers her mouth, stifling a gasp. “Though I’d say she’s more in her forties, early forties – that’s what I mean by beyond the childbearing age. It takes a woman to know these things. Does her age have any bearing on her disappearance?”

Mr Devonshire smiles. “If you were our age…”

“Let’s not detract from the matter at hand, dear. You see, Miss Eagles is missing. We are going away tomorrow, and that leaves us with the small problem of Fritz.”

“Fritz, the cat. We’ve been looking after him, didn’t you hear me? He used to belong to Eunice, and when she passed away Miss Eagles took over, very kindly – she could’ve sent him to an animal shelter.”

“Now, we’ve been looking after him in her absence. Not much trouble, wet food at night and cat biscuits for breakfast. Quite a pleasure looking after old Fritz, isn’t it dear?”

Mr Devonshire smiles at the idea of old Fritz. “So it is.”

“But now, since we’re going away, we can’t leave Fritz on his own until Miss Eagle’s return, can we? What, if the worst comes to the worst and she doesn’t return? I know we shouldn’t be thinking on those lines, but we can’t take that risk – we can’t leave Fritz alone. We couldn’t do that to dear old Eunice, could we?”

“I left him with the officer on duty, at the Reception Desk downstairs.”

“So there! Fritz is at the Reception Desk. Please, bear in mind that he is not used to being confined. He’s a free spirited young man.”

“You mean the cat? You left the cat with PC Miller downstairs?”

“We couldn’t leave him all on his own in an empty house to fend for himself, could we?” There is unmistakable admonishment in Mrs Devonshire’s tone. “His owner has gone missing. We are reporting her missing, do you understand? You are the person in authority, are you not?”

Gillian agrees and assures the old lady that steps will be taken to track down Fritz’s owner. She shows the elderly duo out and waits for them to say their goodbyes to Fritz, who is yowling in his cage, much to PC Miller’s dismay. Gillian shakes her head, silently prohibiting the constable from querying the animal’s presence at the station.

On the step outside Sexton’s Canning Police Station, Mr Devonshire grabs hold of Gillian’s hand and presses a large key into it. “It’s to the cottage. We’re leaving first thing tomorrow morning, but I will be putting a note in the door for Nicola to contact you for the key and the cat, if you don’t mind.”

“No, not at all. We’ll look after Fritz.” This probably breaks every rule in the book, but what do you say to an elderly couple expecting your help? Direct them to the nearest RSPCA?

“That’s good.” He shuffles away, his head leaning towards his left shoulder. He catches up with his wife by a red station wagon where she is strapped into the passenger seat, ready to go. They have a brief exchange and, hurriedly, Mr Devonshire waves to Gillian to wait. He shuffles back, this time with a page from Mrs Devonshire’s precious notebook. “Our telephone number in France. As soon as you know what’s happened to Nicola, let us know, will you? We promised Eunice we’d look after the girl.”

And then you promised the girl to look after the cat, Gillian smiles under her breath, but says nothing out loud other than to wish the old man a good holiday, and not to worry – she will be in touch.

Swimming with Sharks (Accent Press) was released on 28th April 2016. 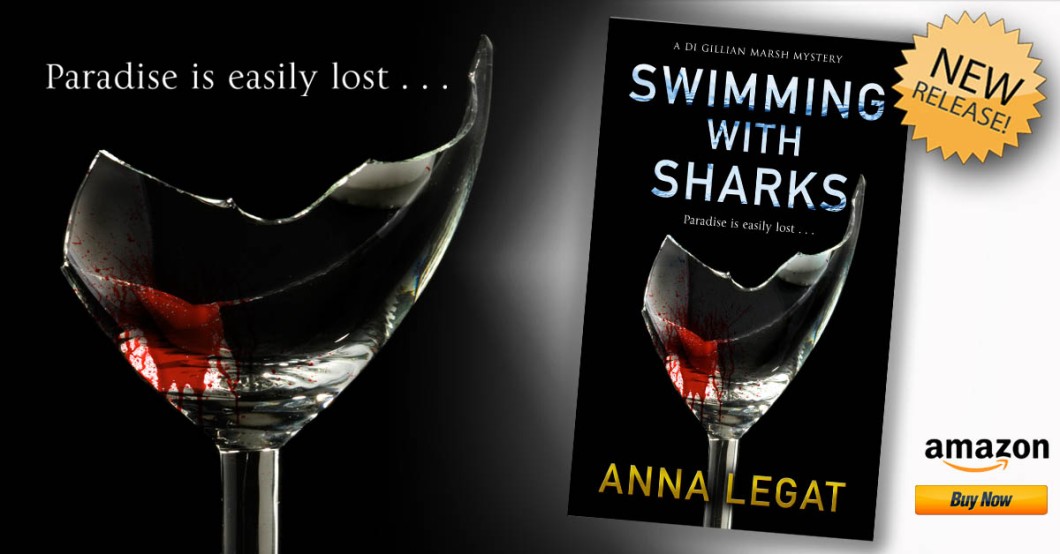