We set off for Dover and entered a torrent of rain, which followed us all the way. There is nothing closer to my heart than the companionable British weather!

We passed many a weird road sign, but one truly stood out. It was one of those temporary yellow signs warning of calamities such as roadworks and narrowing lanes. This one said: SIGN NOT IN USE. So, someone went to the trouble of erecting a middle-of-nowhere billboard to say nothing at all! Ingenious!

We had a day break in Hastings, a sleepy seaside town which had the dubious honour of welcoming to Britain that foreign invader, William the Conqueror. Not a French restaurant in sight so we settled for Nepalese. It was yum-yum, but it left me with my guts strewn on the floor. My delicate and bland palate cried for warm milk with honey.

The beach was pebbly and offered the benefit of a free foot massage. Daughter and I took the offer, Husband took the pavement like any civilised man would.

The cruise ship was huge. It was in fact a floating town with a whole range of man-friendly facilities, shops, restaurants, libraries, gyms, swimming pools, cafes and theatres. We decided that if global warming was to come true and the world was to be flooded with the thawing Arctic ice, we should pre-book a cabin on a cruiser and give the climate change our proudly erected middle finger. Meantime, Daughter and I went swimming whilst Husband chose the sophisticated option of reading a book on the top deck.

For dinner, I ate so much that my stomach became inflated like a buoy. Nevertheless, I couldn’t say no to a dessert. On a positive note, I got deflated in the night, singing along with an Elvis impersonator.

Cruising choppy waters of the North Sea is a very noisy business, especially when one is trying to get some sleep.

Oil rigs are not as attractive a sightseeing option as you may think.

Seagulls will survive a nuclear or climatic Armageddon. It’s all water off their backs.

Lost the count of days. Everything became a blur.

I woke up with a dreadful headache and, in pursuit of compassion, informed Husband accordingly.

‘I’ve got a bloody bad headache,’ said I.

We spilled into the streets of Amsterdam. We discovered that apart from cows, cheese, clogs, bicycles, prostitutes and cannabis, dogs were also Holland’s national treasure. We bumped into a dog in every restaurant and public place. There was even a dog in the gallery, admiring the Judgment Day painting. I regretted not bringing Mango with us. She would’ve loved to be worshipped in double-Dutch.

The 2-hour queue to Ann Frank’s annexe put us off so we went for the Old Masters in Rijks Museum. God, the Night Watch hit me between the eyes with its absolute perfection! I just gaped like a lightning-stricken idiot. Then, Daughter and I felt to our knees and prayed, thanking God for giving us Rembrandt. Husband was looking for the loo.

After another feast fit for kings, we watched a magician hang his wife in mid-air on a broom stick. Husband is still working it out. He is now contemplating the possibility of a magnetic field being hard at work.

It was raining. When it rains in the Low Countries, it rains like it means it. We flip-flopped through puddles of water and God knows what else. Crazy cyclists wheezed by, taking our noses with them and leaving us in their wake. Did I say it was raining and we had to use amphibians as the most appropriate mode of transport?

Another impossibly long queue and we gave up on Van Gogh. I wiped off my tears and settled for the consolation prize: a trip into the back alleys of Amsterdam’s Red-Light District. Husband positively glowed at the very thought of it. Regrettably, the brothels looked all deserted. Either the jolly hookers were on strike or busy in the back room.

To detoxify I took Daughter to see The Street Cat Named Bob. I was enjoying it until some miserable old twit with no life of his own to speak of and a face of a squashed puffer-fish with a wispy moustache told me off for “kicking his chair”! I wasn’t anywhere near his chair – my feet were battering the chair next to him! With an attitude like that and notwithstanding that face, it came as no surprise that he was cruising on his own. Dickhead.

I was cheered up by a comedian who had a way with words like no other. Lloyd was his first name, but I didn’t catch his surname. Joke I remember:

Q: What’s the difference between a prostitute and a wife?

A: One is Pay-As-You-Go and the other one is on contract. 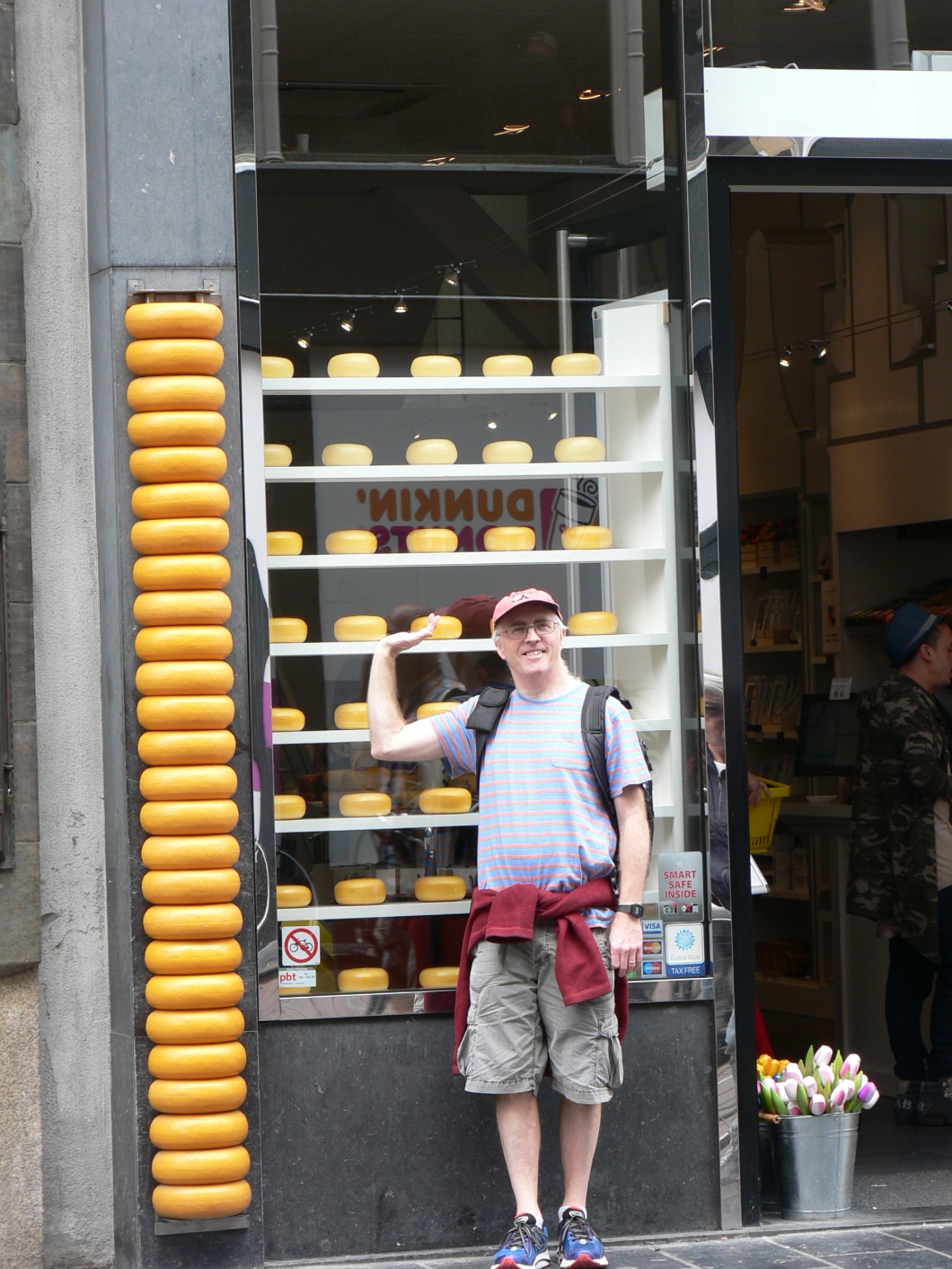 I developed a most impressive set of blisters on my feet for walking in high heels. All because in Europe I felt compelled to put my European hat on, and trainers simply don’t go with a hat. My blisters are like large jelly fish specimen stuck between my toes. Still are.

I tried to steam them in a sauna room, but they only grew bigger and puffier. No plaster was large enough to cover them so I took to walking in slipper-clogs. I acquired a pair of those as a souvenir. We also bought, as you do when you don’t know what to do with the rest of your foreign currency two minutes before leaving for home, some hand-painted tulips, Dutch china coasters, key rings and a statue of a cow. 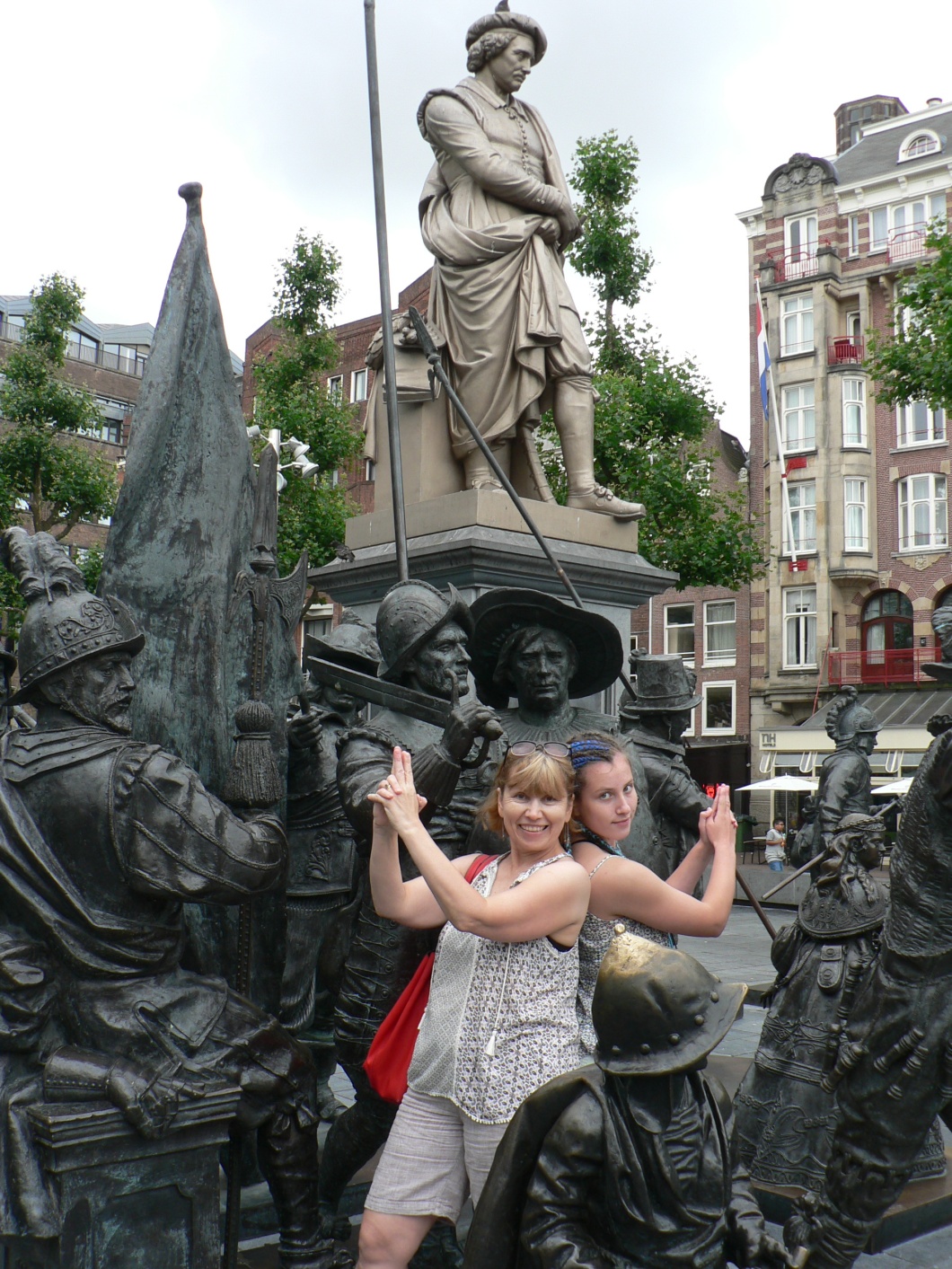 Eating had become a dangerous habit. Time to go on a watermelon diet!

On a positive note, even though we were surrounded by geriatrics, nobody died and we all arrived back in Dover in more or less one piece.