Sandman, the conspiracy of outcasts 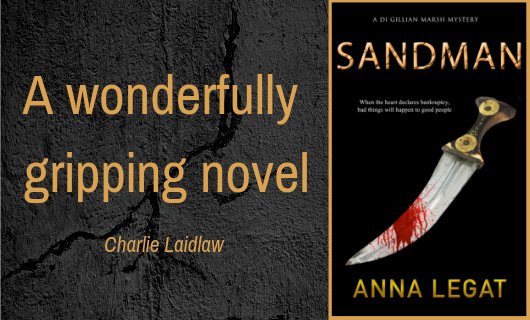 Just off the genteel Quakers Walk weaving its way amongst rolling fields towards Devizes’ White Horse sprawled upon Roundway Hill, a timid narrow footpath dives into a deep wood. The path is frequented by shady individuals: most of them skinny and unkempt, dressed in threadbare garments, looking older than their actual years due to what one would describe as falling on hard luck.

I once followed that path. It took me down a slippery slope and across a lazy stream towards a well-camouflaged network of under-the-scarp caves. Their existence was betrayed by rugs flapping in entrances and sheets of corrugated iron wedged on top of them. There were also signs of a campsite, a stack of firewood and a few empty bottles and drugs paraphernalia scattered around. The place had a distinct vibe of alienation, depravity and wretchedness about it. It was the homeless’ colony.

In the bushes not far from the path, I heard grunting noises. A quick reconnaissance revealed a couple engaging in the act of fornication. Out in the open! In broad daylight! Those were my first indignant reactions to what I was witnessing. Later on however, upon further reflection, I concluded that I couldn’t really expect the homeless to go and get a room, could I?

That god-forsaken place would a few years later make a perfect setting for Sandman. Haji had to find a hiding place, hole up in there and stay under the radar for days. He had to hide in plain view. He had to blend in. He had to look like he belonged. An Afghan outsider in an alien land, he could not book a hotel in the city or waltz into a quaint village pub in search of low-key accommodation. But he could sit around a campfire with a bunch of like-minded outcasts, and look like he was one of them. They were as disenfranchised as he was. The pariah status was his and their common denominator.

But was their shared existence on the outer perimeter of respectable society enough to give them strength in togetherness – well, let’s see…

Sandman is out tomorrow, 11th April 2019, the fourth instalment in the DI Marsh crime series.