How well do you really know the ones you love?

A dark and brilliantly funny look at what being a fly on the wall is really like, Life Without Me is Anna Legat’s debut novel.

Georgie Ibsen is a successful, cynical, fortysomething hotshot lawyer. She runs her life, professional and personal, with precision and clear purpose. She’s just made a breakthrough in a crucial case, her family is growing more independent … things couldn’t be better.

Until it all comes to a screeching halt when she’s involved in a hit-and-run and ends up in a coma.

Somehow, in her comatose state, Georgie is given unique glimpses into the lives of her nearest and dearest, their most intimate secrets: her boring husband’s intense involvement with a homely colleague, her son’s lovelorn yearning for his mother’s Vietnamese nurse, her fifteen-year-old daughter’s bad boy boyfriend, who just might be linked to the criminal mastermind involved in her last big case… 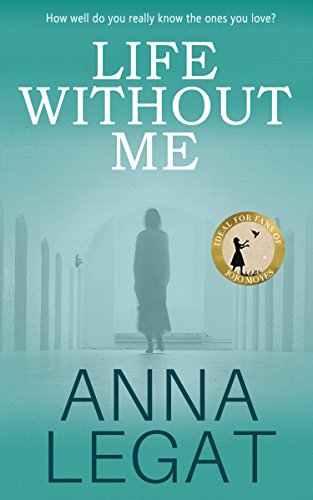 If you think Life is hard, try Death! Accompany Paula on her eventful and hilarious journey into the Afterlife.
Perfect for fans of Jasper Fforde and Nick Spalding, and for lovers of humorous tales about God, demons and angels , such as Good Omens by Terry Pratchett and Neil Gaiman, or Mikhail Bulgakov’s The Master and Margarita.
Paula didn’t mean to kill herself, but what’s done is done: she is dead. She goes straight to Hell. Hell is no place for a lady (even one of dubious repute) and Devil is a prickly character. Paula doesn’t feel at home. She must make it to Heaven. By hook or by crook.
And there is another reason: Paula has her child, Pippi, to deliver from Evil. She mobilises her troops: a fallen prophet, Angus, and a closet-gay WWII pilot, Ronnie. Together they set off on a bumpy road to Heaven. Their quest for salvation begins.
Paula goes to Heaven is a tongue-in-cheek tale about a woman transformed by motherhood. It is a hilarious and heart-warming story of redemption and second chances.